As we reflect on one of the darkest days in our country’s history, we remain thankful for the sacrifices and determination of everyone involved. 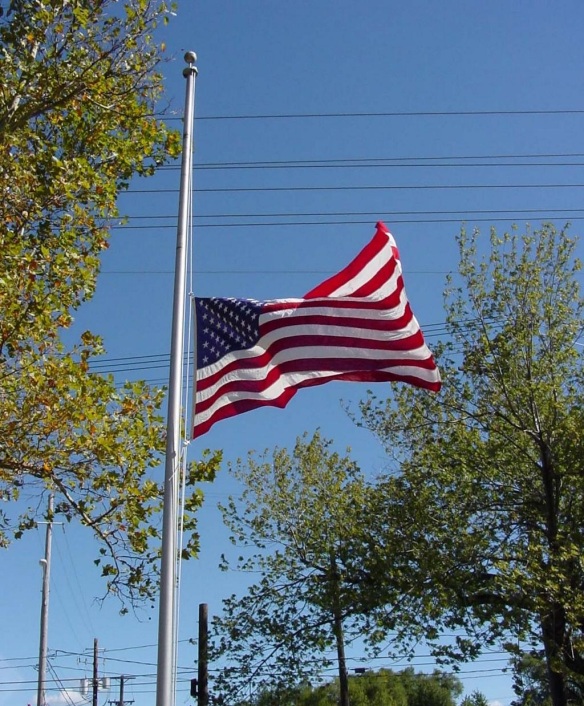 Many have asked what I was doing on September 11th. You can read about it here.

Proud to have worked to support FDNY after the attacks primarily serving at 44 Engine in Midtown Manhattan.

We dug at the pit but sad that our crew didn’t find a body to return to the families that lost everything.

Regardless of time, all Firefighters are proud to honor each of the fallen.

My 343 Brother Firefighters who died in the line of duty will never be forgotten.

Tacked on the wall at 10s house

Fast forward to 2020, and we’re all having a rough year. But we as a nation must come together.

While it seems bad right now, we will persevere and overcome these challenges.

We will recover and rebuild because we’ve done it before. Trust me, I’ve been in One World Trade and it’s wonderful in there. Special thanks to my friends at FEMA Region II.

Thanks to Delia and the crew at FEMA Region-2!

…and the views was spectacular.

Statue of Liberty (south view) from One World Trade. 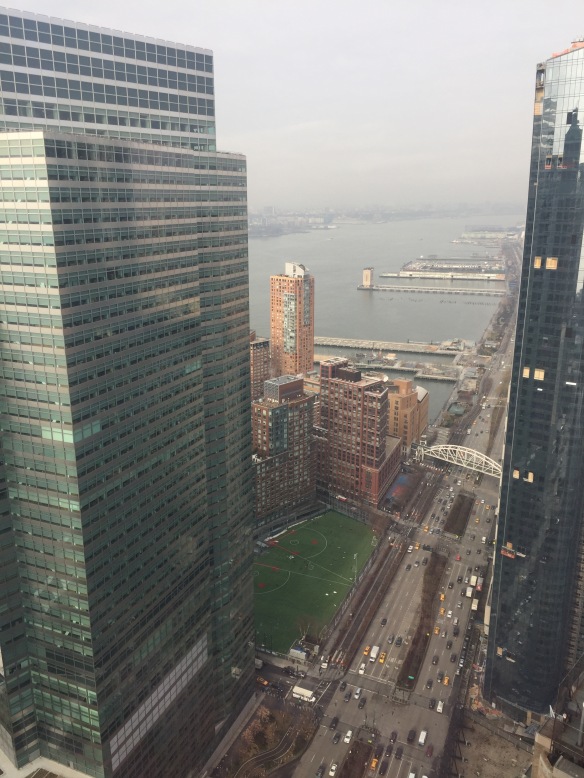 The view of West Street (north view) from One World Trade.

However, we will never forget the sacrifices heroes have paid for these freedoms we enjoy. At the base, of One World Trade sits the daily reminder – two incredible tributes to the victims of the September 11th attacks from the former WTCs. 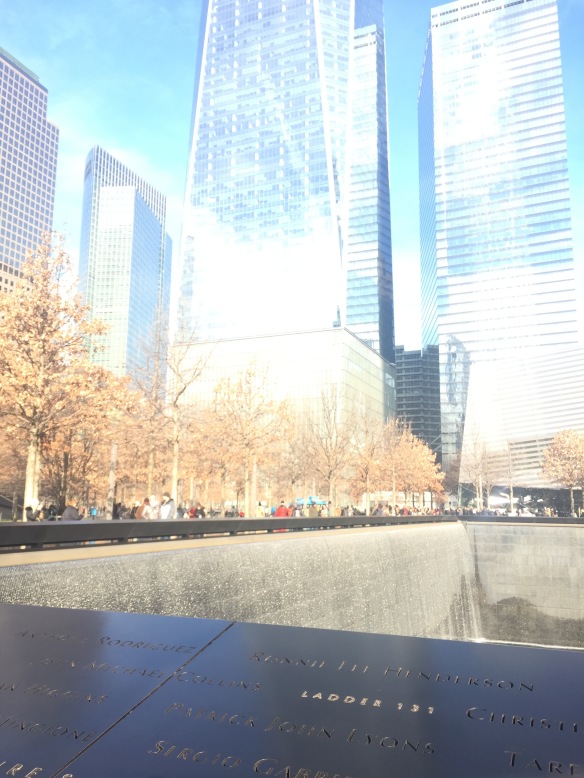 Part of the September 11th Memorial in NYC.

Our colors don’t run. Our fight for freedom will will never waiver. 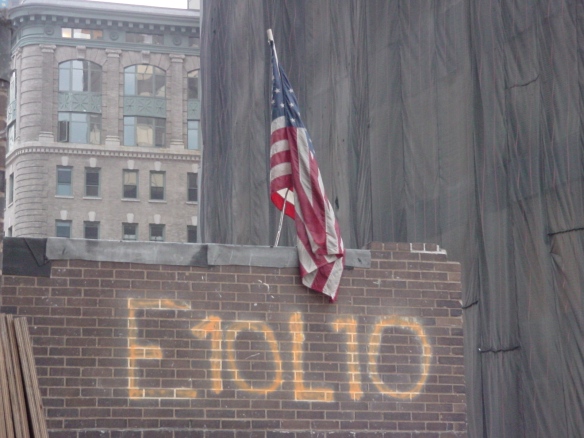 We has never been shy about being in front and fighting for what’s right. As you know, our nation has gone to the ends of the earth to ensure safety…and we hope to continue this Herculean effort to protect freedoms for decades to come.

“…and secure the blessings of liberty to ourselves and our posterity…”

America the beautiful, my home of the brave.

FISCAL YEAR 2017 STATE FIRE MARSHAL VOLUNTEER FIREFIGHTER I TRAINING GRANT PROGRAM OVERVIEW AND APPLICATION
Thanks to a generous allocation of funds from the Bureau of Worker’s Compensation, the Ohio Department of Commerce, Division of State Fire Marshal (SFM) is pleased to announce the availability of the Volunteer Firefighter I Training Grant. This grant provides funding in State Fiscal Year 2017 (ending June 30, 2017) to pay for the costs of providing Firefighter I or Firefighter I Transition certification courses free of charge to select students by SFM approved class providers.

FISCAL YEAR 2017 STATE FIRE MARSHAL VOLUNTEER FIREFIGHTER I TRAINING GRANT PROGRAM OVERVIEW AND APPLICATION
Thanks to a generous allocation of funds from the Bureau of Worker’s Compensation, the Ohio Department of Commerce, Division of State Fire Marshal (SFM) is pleased to announce the availability of the Volunteer Firefighter I Training Grant. This grant provides funding in State Fiscal Year (SFY) 2017 (ending June 30, 2017) to pay for the costs of providing Firefighter I or Firefighter I Transition certification courses free of charge to select students by SFM approved class providers. By partnering with eligible class providers, it is the goal of the SFM to ease the costs to local governments, promote shared services and broaden the availability of these courses throughout the state. Grant funding is limited to $454,711.44 state-wide and will be dispersed to compliant course providers on a first come first serve basis. “Select students” are volunteer firefighters affiliated, as members, with fire departments that pay premiums (or local jurisdictions that pay on behalf of the fire department) to the Bureau of Worker’s Compensation state insurance fund in accordance with Section 4123.35 of the Revised Code and are otherwise in compliance with the Bureau of Worker’s Compensation regulations (“compliant fire departments”).

Now go and get your Fire/Rescue Department some free training!

No Tonka, according to the FEMA NIMS Typing, this is a Tender.

**Truth be told, I’ve mistakenly done this over the statewide radio. #oops

Honor your fallen Firefighters who gave their life on December 3, 1999.

***In my opinion, this fire is a defining moment in fire service history***

All Firefighters should know about this fire by heart.

Well, even if you don’t read the entire NIOSH report, at LEAST read the summary below.

On December 3, 1999, six career fire fighters died after they became lost in a six-floor, maze-like, cold-storage and warehouse building while searching for two homeless people and fire extension. It is presumed that the homeless people had accidentally started the fire on the second floor sometime between 1630 and 1745 hours and then left the building. An off-duty police officer who was driving by called Central Dispatch and reported that smoke was coming from the top of the building. When the first alarm was struck at 1815 hours, the fire had been in progress for about 30 to 90 minutes. Beginning with the first alarm, a total of five alarms were struck over a span of 1 hour and 13 minutes, with the fifth called in at 1928 hours. Responding were 16 apparatus, including 11 engines, 3 ladders, 1 rescue, and 1 aerial scope, and a total of 73 fire fighters. Two incident commanders (IC#1 and IC#2) in two separate cars also responded.

Fire fighters from the apparatus responding on the first alarm were ordered to search the building for homeless people and fire extension. During the search efforts, two fire fighters (Victims 1 and 2) became lost, and at 1847 hours, one of them sounded an emergency message. A head count ordered by Interior Command confirmed which fire fighters were missing.

Fire fighters who had responded on the first and third alarms were then ordered to conduct search-and-rescue operations for Victims 1 and 2 and the homeless people. During these efforts, four more fire fighters became lost. Two fire fighters (Victims 3 and 4) became disoriented and could not locate their way out of the building. At 1910 hours, one of the fire fighters radioed Command that they needed help finding their way out and that they were running out of air. Four minutes later he radioed again for help. Two other fire fighters (victims 5 and 6) did not make initial contact with command nor anyone at the scene, and were not seen entering the building. However, according to the Central Dispatch transcripts, they may have joined Victims 3 and 4 on the fifth floor. At 1924 hours, IC#2 called for a head count and determined that six fire fighters were now missing. At 1949 hours, the crew from Engine 8 radioed that they were on the fourth floor and that the structural integrity of the building had been compromised. At 1952 hours, a member from the Fire Investigations Unit reported to the Chief that heavy fire had just vented through the roof on the C side. At 2000 hours, Interior Command ordered all companies out of the building, and a series of short horn blasts were sounded to signal the evacuation. Fire fighting operations changed from an offensive attack, including search and rescue, to a defensive attack with the use of heavy-stream appliances. After the fire had been knocked down, search-and-recovery operations commenced until recall of the box alarm 8 days later on December 11, 1999, at 2227 hours, when all six fire fighters’ bodies had been recovered. NIOSH investigators concluded that, to minimize the risk of similar occurrences, fire departments should

Say hello to my little friend…

Much to the dismay of my fellow Firefighters, Emergency Management Professionals, Paramedics, EMTs, and Police Officers – I didn’t burn my house down.

But it IS time to chow down with the family.

Hope these tweets and posts have helped you out in your turkey adventures today.

Note: For cleanup? I’m going to let the oil cool down for about 6 hours. And regardless if there is no fire, I’m still keeping my extinguisher on the ready.

Keep all of these safety tips handy as you finish your bird this joyous holiday season.

I have much to be thankful for…like you folks as well as my solid family and friends.

Enjoy your evening everyone!

OMFG, either this is going to go well, or really bad. 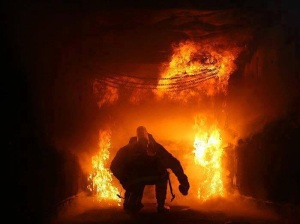 Looking good so far! But still, worried about a gigantic fireball here at #DFT2013

Hot oil will burn you! 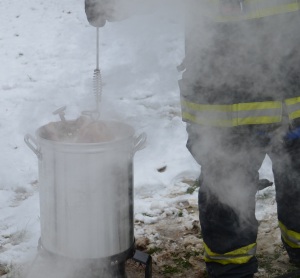 And of course you measured your turkey with water and IN the pot before you started heating up the oil right?

Checking your bird’s volume BEFORE you dunk it into bubbling hot oil is a smart move.

If you haven’t, here’s a few easy steps that only take 60 seconds:

If you did NOT measure your oil prior to frying, your pot could overflow…and this could happen to you

Don’t be crispy this Thanksgiving!