Rolling in on a Saturday to the EOC….

Did one of our partners get their drive through testing station up and running already?

PIO to SITL: How do copy?

Man, the news is going to be all over this one…

The glorious part of the job: Need a white balance?  Is this mic working? Testing. 1-2-3!

As promised, here’s my quick initial review of ello. 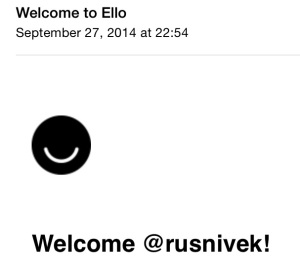 It’s only been a few days…so I figured since everyone isn’t on it, this might help show some of the difference between this new emerging social media platform compared to others.

Here’s a quick news package story from the founders of ello.co from Vermont.

For those that think this is like Facebook? Nope. The company’s mantra of a simple ad-free platform is as plain jane as can be. Not much there. In fact,

Few initial notes I have on ello:

Forgot your password? I tested their forgot password send. The emailed reminder is hilarious, but NSFW. This kind of email would (obv) not pass work computer filters. 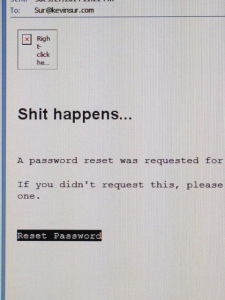 I do enjoy the quick simple emails with picture.

But let’s be honest, most of the ello participants that are already on ello, were drawn to the line in the email last night…”

The use of “thingy” has me worried…and of course excited. Thanks Matt.

Well, since this is in beta, I’m sure there will be more good things to come. But at this time, I am doubtful will hold (DWH).

Not even close to ready for use during disasters or emergencies.

Because of the low participation and beta, this platform is not useful for preparedness or response or recovery or intelligence.

Special thanks to @schnick for the invite.

Maybe more good stuff from ello.co on the horizon.

It’s Thursday in the fourth week of 2014 National Preparedness Month.

This week’s theme is consistent with FEMA’s National Preparedness Campaign: Practice for an emergency

#25: Just like you, the professionals train and test their emergency plans. #Prepared2014 #NatlPrep

It is an essential part of your plan…actually doing it!

This was the view of the State of Ohio Emergency Operations Center where numerous emergency management agencies across the state participated in a multi-agency all-hazards annual power plant training. This training was evaluated by FEMA Region-V.

See, even the professionals train too!

Keep up the great work!