At the Dunk: Here’s how FEMA stepped up in RI, ready to give 3,000 COVID vaccines a day

Richard Scott was in Georgia. Other emergency workers like him were scattered across the United States.

But they were just a phone call away in late February as Rhode Island officials analyzed their options for ramping up vaccinations and saving lives one year into the pandemic.

On March 1, they asked the Federal Emergency Management Agency to deploy a team that would reinforce the legions of local vaccinators who were already on the job. 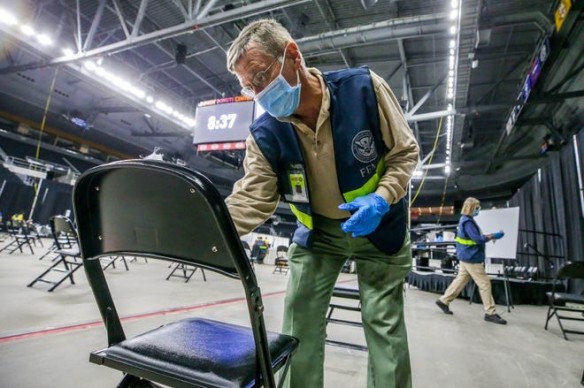 That’s how Scott, a 73-year-old police instructor from Brunswick, Georgia, ended up on the floor of The Dunk, playing for a team that, as of Tuesday morning, was capable of vaccinating 3,000 people per day.

Overall, FEMA has brought in a force of 201 workers to support Rhode Island’s vaccination effort this month, drafting personnel from more than 20 different federal agencies.

“Everyone here that I’m working with is looking to make a difference,” Scott said. “A positive difference. On our end a positive difference is to get as many people through here safely vaccinated as quickly as we possibly can to make the country that much better.

Rhode Island was the first New England state to ask for federal help with the job of vaccinating its population, says Emily Martuscello, a FEMA manager from New Hampshire who has coordinated staffing at both vaccination sites.

“It’s the biggest emergency everyone’s ever been a part of,” she said. “It’s ginormous.”

Scott’s background is in law enforcement. He’s an instructor with the Federal Law Enforcement Training Centers.

His 48 years in police work encompass stints at the New York Police Department serving with the training branch of the FBI.

He is part of the U.S. Department of Homeland Security’s Surge Capacity Force.

If an emergency exceeds the capacity of FEMA’s disaster workforce, the secretary of the Department of Homeland Security activates the surge force to help.

“We have members of the Surge Capacity Force deployed all over this country right now,” says Martuscello “It’s the biggest deployment I think we’ve ever had.”

Scott’s emergency work has taken him to Puerto Rico and the U.S. Virgin Islands after Hurricane Maria.

Now in Rhode Island for his first time, his job is greeting patients as they arrive on the floor of The Dunk and head toward registration.

“As the people come down and once they hit this floor, we try to move them through the process in a timely but safe manner.”

Two commissioned officers from the U.S. Public Health Service, both of them in combat-style blue fatigues, are on the scene, too.

“We have very rigorous quality control in place to make sure the right person gets the right vaccine at the right time,” says Martuscello.

Emergency medical technicians and paramedics from the U.S. Forestry Service are among the vaccinators.

All of them are licensed and received training from both the National Guard and the Rhode Island Department of Health, says Martuscello. The preparation, she says, included competency tests. 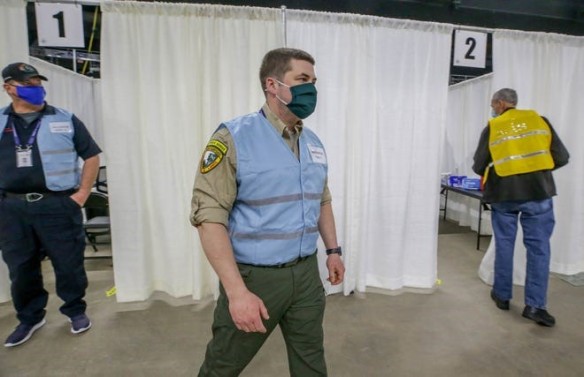 Tom Trask, 32, a U.S. Forest Service Ranger, is wearing his forest ranger uniform under a vest that says vaccinator on the back.

As an EMT, he has experience with certain types of injections, such as epinephrine for allergic reactions, but this is his first time administering vaccines, he says.

“We’re pretty much an all-hazard resource,” Trask says. “We do anything and everything we can to help people.”

A husband-wife team of U.S. Forest Service workers, Robert and Judy Beanblossum of Pisgah Forest, North Carolina, are among staff who watch over people just after they receive the vaccine. They are versed on different signs of allergic reaction to look out for.

In 45 days, the Rhode Island tour of the Beanblossums and others on the team is expected to end, says Martuscello. At that point, an ongoing hiring effort should be ready to fill those jobs with locals.

Joseph Wendelken, spokesman for the Rhode Island Department of Health, says the state had requested “human resources” from FEMA so it would be prepared to administer increased volumes of vaccine.

The state also requested the help “to meet the new federal and state accelerated vaccination timelines” and its request was “encouraged” by FEMA officials, Wendelken said in a statement.

While FEMA has staffed the two sites, the agency does not manage them, which lines up with a comment made by Martuscello: “We have a mantra here at FEMA that things are federally supported, state managed and locally executed.”

The support from FEMA is among “critical pieces” that have made it possible for the state to put resources into tasks such as vaccine outreach, providing geographically dispersed vaccination sites and vaccinating some of the hardest-hit communities. That includes communities of color and people who are homebound, he says.

Tuesday marked a full year since then-President Donald Trump declared the coronavirus to be a disaster in Rhode Island.

As of March 24, FEMA had committed $456 million in disaster-relief aid, according to a FEMA spokesman, Kevin Sur.

That aid works through a reimbursement process.

Those flows of aid represent another level of support beyond the extra staffing for the vaccination clinics this spring, says Armand Randolph, who heads up the recovery branch of the Rhode Island Emergency Management Agency.

Randolph was struck by the meals that FEMA has provided  — more than 505,000 box meals. Randolph says those meals went to residents, including people who could not leave their homes for medical reasons.

Randolph says that assistance isn’t as valuable as the diverse emergency workers who came to southern New England this month, “willing to deploy from their loved ones to come here and assist with saving the lives of Rhode Islanders.”

Finally getting around to turning on dark mode in Facebook. 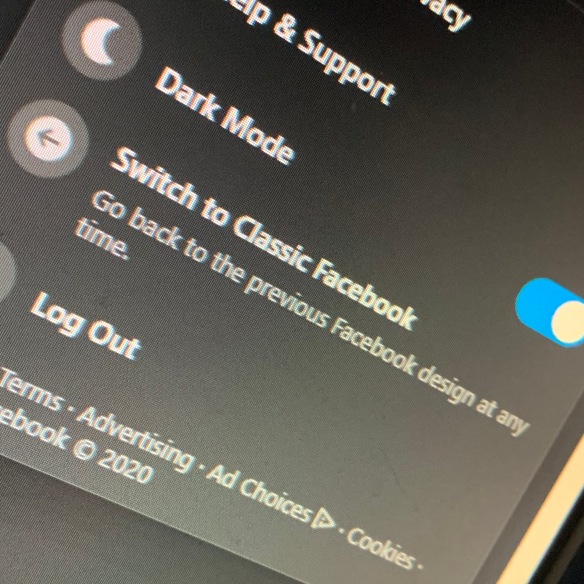 Don’t worry, Twitter has had this since forever ago.

I swear, I must be the only PIO without a ringlight right? 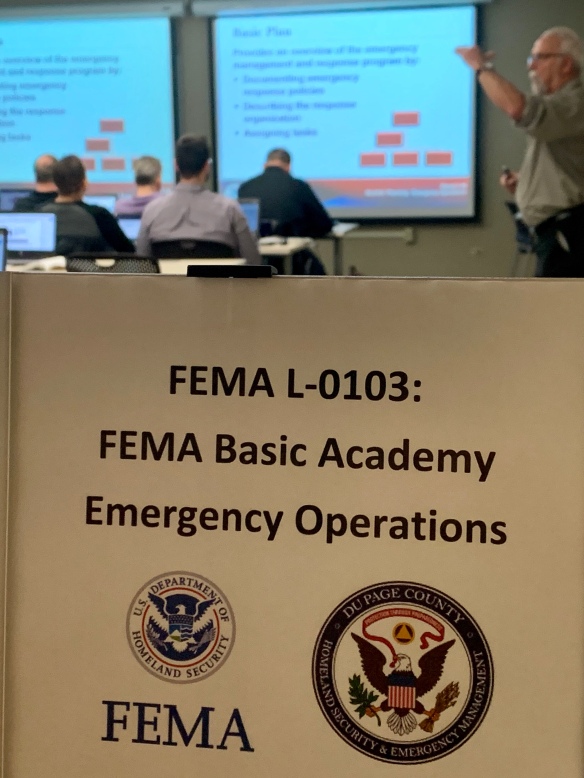 Enhancing the skills of our most trusted partners from Iowa, Indiana, Wisconsin, Michigan, and Illinois.

More group work as we address planning for our Whole Community response and recovery in this planning class.

Solid collaboration from all public safety representatives from local to Federal level. 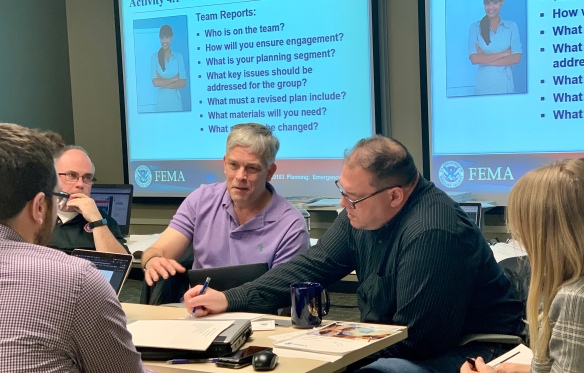 Final group activity as we continue to enhance our Emergency Operations Plans. 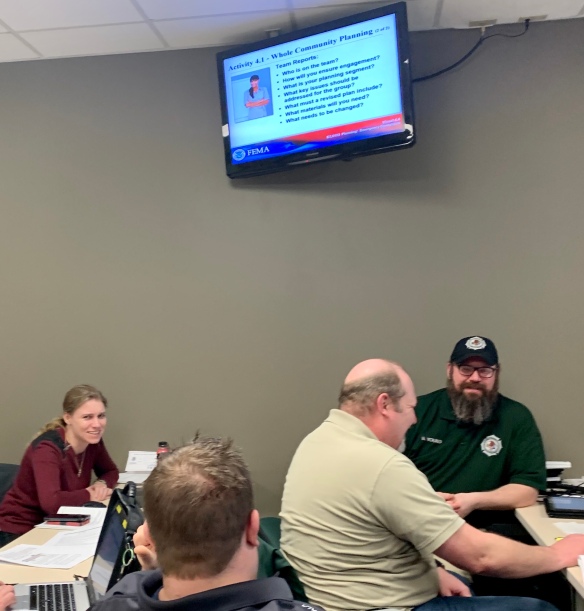 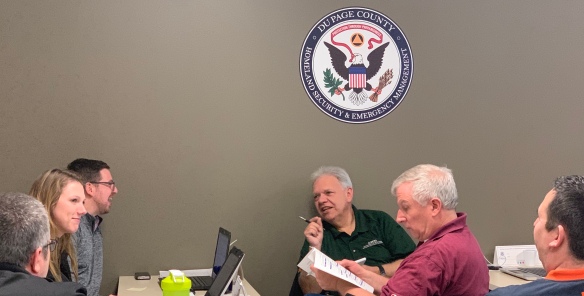 Many thanks to local, county, state, and Federal officials/leaders attending representing FEMA Region 5 and FEMA Region 7. 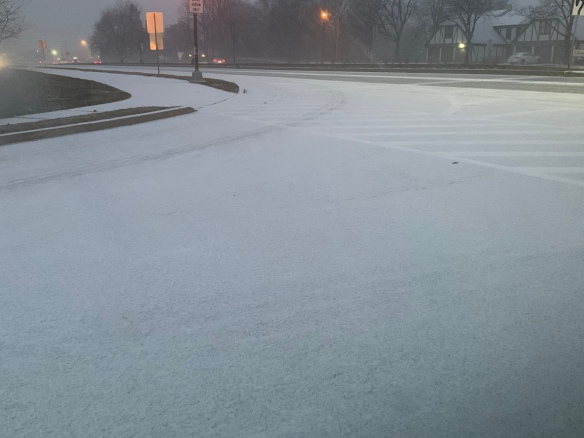 Thanks again to Will County (IL) EMA Director Harold Damron for instructing this ICS class with me this week.

Lots of great discussion on coordination and resource ordering. Deep convos on complex problems esp on after action reviews (AARs) and implementation plans. And the complexities of collaboration is incredibly important esp at the Type-1 and Type-2 responses. As you know, that is the crux of Emergency Management.

Special shout out to Chief Gorsky and all the members of the Darien–Woodridge Fire Department on the fine hospitality.

EM-1 clear, enroute back to quarters.

Gotta prep for our next class!

Holey moley. TikTok has been around for a year.

Comparatively to other social media platforms, I have said “WTF” to more TikToks than Tweets, Grams, and snaps combined.

P.S. A rando kid told me that TikTok isn’t a verb. Yet.

As part of our ongoing efforts to help enhance the skills of the PIO across the country, here’s another #MediaMinutes interview w/ RTV6 Paris Lewbel!

For more information on Paris-

Good morning from the City of Chicago Office of Emergency Management and Communications! 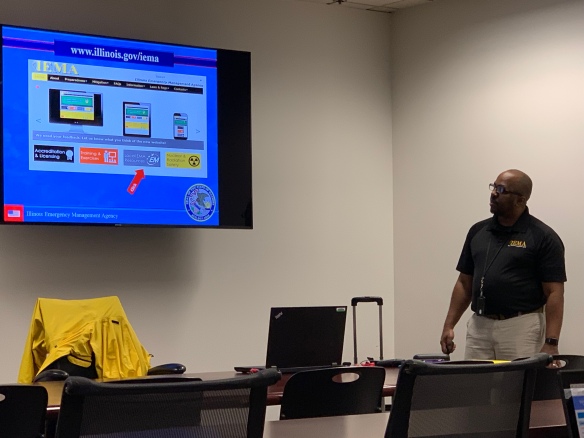 Of course, as a good Emergency Manager, we want to take a look at the host city’s EOP.

Lots to discern and digest from our partners.

Now, for those who refuse to share information and hold information tight to their chest….that’s dumb. You realize when the big one hits, your isolationist actions will prove to be detrimental to the success of the response/recovery of any emergency. Again, work closely with your partners BEFORE a disaster.

Looking down into the PSAP center floor, lots of call takers working the good for the community.

PSAPs and EOCs are kept relatively dark to help with eye strain. Telecommunications have a tough job. If you haven’t already done so, I’d recommend that you sit in their chair one day and observe. Quite honestly, I’d take working the squad any day. 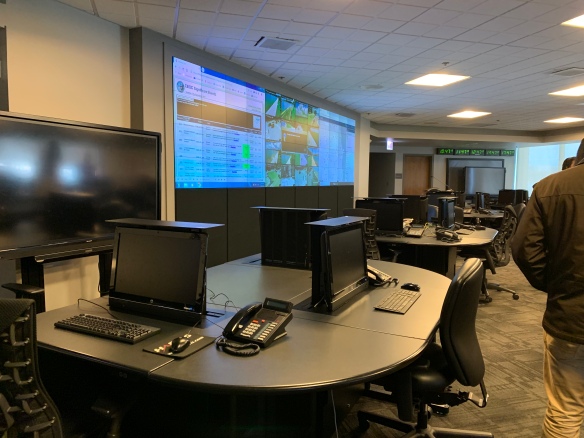 Quick look into the City of Chicago’s Emergency Operations Center (EOC) too.

And calm yourself PIOs….I found it. 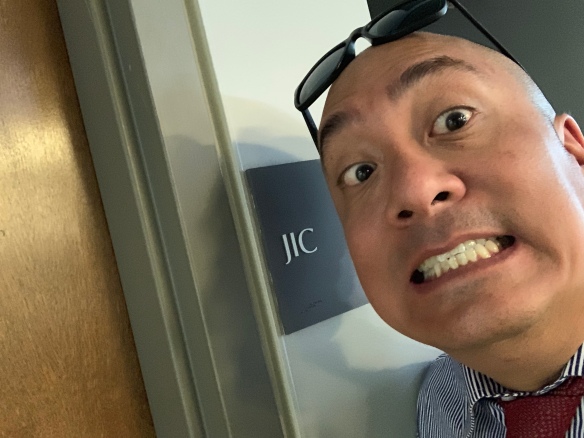 Get your City of Chicago Joint Information Center (JIC) on baby! I sense I will be spending activation time here soon.

And yes, I’m wearing a tie.

As we close out response/recovery discussions for the day, we must spend more time thinking about cross training and enhancing our multi-jurisdictional skills. Working together is critical to any event or incident. We must overcome the stigma and the predisposed notion of kingdoms and fiefdoms. We must work together before a disaster. This will result in better response collaboration and recovery efforts.

Where am I? They threw up the bat signal so….

Reporting live from the Bat Cave:

As we continue our training, we want to be cognizant of all kinds of skills needed to be successful in Emergency Management.

Many of you have been apart of a training or exercise…and have indubitably identified that communications is an action that needs more work. But how can you make that fun? Well, enter one of my Thunderbolt-esque exercises.

Giving the nod to former FEMA Administrator Craig Fugate, these types of no-notice trainings engage our staff and forces them to think outside the box.

How outside? In this exercise, we cover

And to boot, it’s non-traditional training cause there are no powerpoints. Zero. Zilch. No joy. Gonzo. Nada Ghostrider.

As adult educators, we often forget that people learn things differently. Additionally, we as instructors need to explore outside our comfort zone and teach things in a classic lecture AND non-traditional style.

I am incredibly fortunate to have a staff that loves to train and enhance their skills. Train like you fight!

Want to know more? Want to train better? Come and be a part of my Emergency Management Team. You’ll see.

An incredible Wednesday as we continue our efforts to collaborate here at the 2019 National Preparedness Symposium.

I chatted with Acting FEMA Administrator Pete Gaynor on the importance of continuing to build a culture of preparedness and how it is so critical to our audiences.

He then popped the morning plenary session to the entire conference and FEMA employees. Huge discussion on our strategic plan and then a few things in his role as a state director he wished he had when he started at FEMA.

Solid insight from the top at FEMA. Nice guy.

Lots of afternoon sessions including one with the National Disaster Preparedness Consortium (NDPC).

Great discussion amongst participants including

After the NDPC panel discussion was over, I quickly moved a few rooms over to check out a worthwhile discussion on the I–35 bridge and failing infrastructure. Also had some discussion about structural assessments.

Glad to be having ongoing discussions to maintain our critical access points in many cities across the US.

Then it was time to present my course: Social Media in Emergency Management. Woohoo!!!!

Glad to be sharing the knowledge with providers from across the country.

Engaged audience including a few questions on engagement as well as OSINT gathering and augmented reality. Great to peek the interest and maybe MAYBE be that catalyst for change with our industry.

Shout out to Bronlea the n00b as this was her first trip to the Center for Domestic Preparedness!